The Universidad Politécnica de Madrid (UPM) has opened up the HRE-SDC of the European Space Agency in an event held at the School of Aeronautical and Space Engineering (Escuela Técnica Superior de Ingeniería Aeronáutica y del Espacio, ETSIAE), a school that contributes with researchers who work in the new centre located in Montegancedo Campus.

Both the Minister of Science and Innovation, Pedro Duque, and the Rector of UPM, Guillermo Cisneros, attended this act. Besides, Pedro Duque was also Director of Operations from 2004 to 2006 at the E-USOC (User Support & Operation Centre of Spain), a research centre specialized in space science and technology at the UPM. In addition, Cristina Cuerno, director of ETSIAE; Günther Hasinger, ESA Director of Science; Carlos García, representative of the CDTI (Centre for Technological and Industrial Development) and Ana Laverón, director of the HRE-SDC, have taken part in the presentation.

In his speech, Guillermo Cisneros, rector of the UPM, has focused on the importance of ESA choosing the UPM to create the new research centre. “We are proud that the European Space Agency has relied on this public university at Madrid to manage the records and data extracted from its space missions to the benefit of the scientific community, the whole public and future generations. This is a proof of the mutual trust and the quality of the work that professors, researchers and students of the UPM carry out in their research centres.”

“The time has come to disclose the HRE-SDC, which initially was implemented 2 years ago and through which pilot projects have already been successfully undertaken with data from research conducted by the E-USOC and the N-USOC (User Support & Operation Centre of Norway),” explained Ana Laverón, director of SDC and E-USOC and professor at UPM. 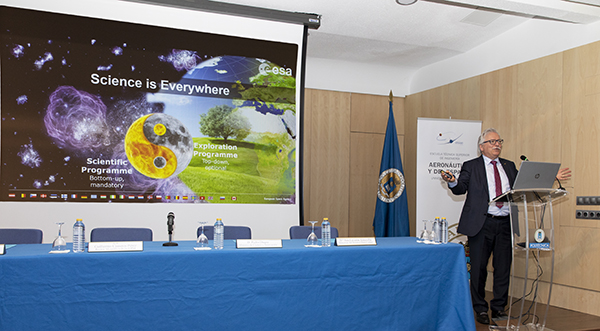 HRE-SDC, data from space missions at the service of the scientific community
The start up of the HRE-SDC is a response to the strong commitment of the European Space Agency to fully exploit and preserve the data generated during various space missions and within experiments on the different platforms, in an initiative called “Heritage Space Data programme.” With the establishment of this new centre, ESA converts a public university in Madrid into a reference centre for data collection and management of experiments carried out in European space missions.

The HRE-SDC is a centre for the reception, conditioning, dissemination and assessment of the scientific data obtained in the scientific missions developed by the ESA of the Human and Robotics Exploration (HRE) Division.

The working team of the HRE-SDC is mainly fostered by engineers from the aerospace and information technology fields. Their work starts by defining the mission to ensure that the data generated is appropriate to cover the mission's goals. Then, they are in charge of structuring and processing the data so they can be stored in the file (HRE Data Archive, HREDA), conditioned and made available to the scientists developing the mission. After a period of exclusivity for those participating in the mission, the data will be available to the entire scientific community, trying to ensure that those who process them and obtain valuable results, send them back to the HRE-SDC to make them available to other scientists and the society as a whole.