His innovative thesis, Impact of continuous climb operations in a high traffic density TMA, has led him to be selected as one of the three best researchers of this important international recognition, annually awarded by the Single European Sky ATM Research (SESAR).

SESAR is in charge of the coordination and consolidation of the EU research and development activities within the field of Air Traffic Management (ATM). As the technological pillar of Europe's ambitious Single European Sky (SES) initiative, SESAR defines, develops and deploys what is required to increase ATM performance and build Europe's intelligent air transport system. Currently, more than 3,000 experts are involved in SESAR whose aim is configuring the new generation of air traffic management.

The improvement of air traffic management to achieve more efficient and less polluting aviation is indeed the focus of the thesis of Javier Alberto Pérez Castán, which has led him to be placed in the second position in the 2019 SESAR Young Scientist Award. He is a Technical Aeronautical Engineer and Aeronautical Engineer and holder of a doctorate degree by the Universidad Politécnica de Madrid (UPM). He is currently an Assistant Lecturer at the School of Aeronautical and Space Engineering [Escuela Técnica Superior de Ingeniería Aeronáutica y del Espacio, ETSIAE]. 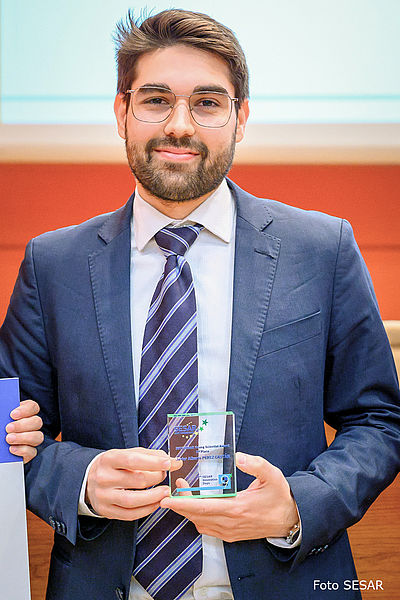 “Impact of continuous climb operations in a high traffic density TMA”, as per his thesis title, focuses on the so-called continuous climb operations (CCOs). These kind of operations are flight procedures that allow aircraft to carry out the most efficient climb, as well as having a great environmental impact on the airport environment, since they helps to reduce both fuel consumption and air pollutant emissions Nowadays, air traffic controllers have to restrict aircraft's rate of ascent and descent to ensure air traffic safety; and therefore, in large airports where air traffic density is very high, this constitutes a major drawback due to the large number of interactions between the air traffic controller and the aircraft, which makes achieving optimal trajectories impossible. 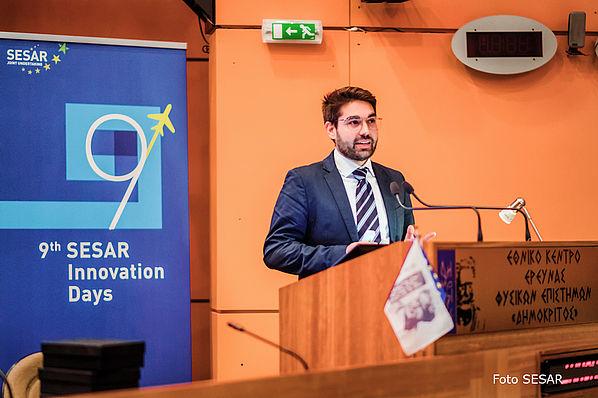 This distinction, granted by SESAR, recognizes young researchers who have made remarkable contributions in the field of air traffic management. The innovative contributions of Javier Pérez's thesis have allowed him to earn this second position: “I have developed a new methodology to analyse the CCOs integration, applied to Palma de Mallorca airport. The main milestones have been the definition of new runway separation minima based on the time difference between two consecutive aircraft taking off, the development of a new conflict-risk model to determine the probability of conflict between aircraft and the and the quantification of the theoretical capacity reduction by the integration of CCOs.”

The award as best young European researcher at ATM has been given to Yunzi Sun, from TU Delft University and third place went to Leonid Sedov, from Linköping University.

The jury, made up of SESAR Joint Undertaking experts and also independent experts in ATM and aviation fields, has met the following criteria when assessing these theses: their relevance to the research in the field of ATM and aviation; the level of innovation achieved, its depth and development beyond the state of the art; scientific excellence and robustness of the approach; impact and relevance of the publications; links between the applicant and the European exchanges during the research; structure, clarity and appropriateness with regard to the thesis document. 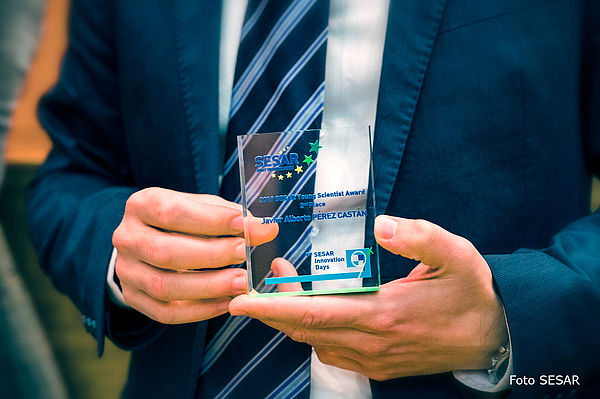 It is worthy to mention that Javier's thesis obtained an outstanding mark of 10 out of 10 with international mention in his dissertation at the UPM for obtaining his doctoral degree. In addition, the completion of the thesis has led to the publication of four research articles in indexed journals, several congresses, and a predoctoral stay at the aerospace faculty of the TU Delft University.

100% UPM education
Javier Alberto Pérez Castán is currently an Assistant Lecturer at ETSIAE. All his educational background is linked to the Universidad Politécnica de Madrid. He completed his degree in Technical Aeronautical Engineering in 2010 with the best academic results of his specialisation in Airports and Air Transport. He went on to study the degree in Aeronautical Engineering, which he obtained in 2013 and later he completed with the Master's Degree in Aerospace Engineering in 2014, to finally obtaining his doctorate in aerospace engineering in 2018. In addition, he belongs to the Air Navigation Research Group (GINA-UPM).

“The training I received at the UPM is technically very good. Particularly, it was really important for me carrying out the Technical Aeronautical Engineering degree because there were very applied and specialised studies, which allowed me to find the professional field in which I wanted to develop my research career”, he acknowledges.

Now, from the teacher's class platform, he observes the evolution the School is undertaking. “ETSIAE has changed a lot since I started my studies in 2007. It has not lost its main pillars on which it rests, but it is in a process of evolution to offer the best possible aeronautical training. Although the entire school does an excellent job, the specialisation in Air Navigation and Airports provide a unique training in Spain to ETSIAE students. In addition, job opportunities within this sector are quite attractive since progress is being made towards a joint European integration, which makes this sector one of the most promising fields in research, professional and personal development”.