With a school project aligned with Industry 4.0, the professor at the School of Aeronautics and Space Engineering (Escuela Técnica Superior de Ingeniería Aeronáutica y del Espacio, ETSIAE) becomes the first the first woman holding the highest representation of the centre.

Cristina Cuerno takes office as Director of the ETSIAE at the Universidad Politécnica de Madrid (UPM) with “pride and responsibility”, after winning the elections on 26 November 2019. The ceremony in which the new Director took over the post has been chaired by the Rector of the UPM, Guillermo Cisneros, jointly with the University Registrar of the UPM, María Teresa González, the President of the Social Board of the UPM, Julio Lage, and the outgoing Director, Javier Crespo.

The new Director of the ETSIAE has a Ph.D. in Aeronautical Engineering from UPM, being the first woman to obtain such a degree in Spain, becoming University Professor in 2016. Her teaching career has been combined with her research work and she has undertaken management functions as well, as Deputy Director within previous management teams at the Escuela Técnica Superior de Ingenieros Aeronáuticos (ETSIA) and ETSIAE. She currently leads the Airbus sponsorship of the chair in Aerospace Studies as well as the Aircraft Accident and Incident Investigation Course (Curso de Investigación de Accidentes e Incidentes de Aeronaves, INACC-aero). Outside the University, she is a member of the Plenary of the Civil Aviation Accident and Incident Investigation Commission (Comisión de Investigación de Accidentes e Incidentes de Aviación Civil, CIAIAC). 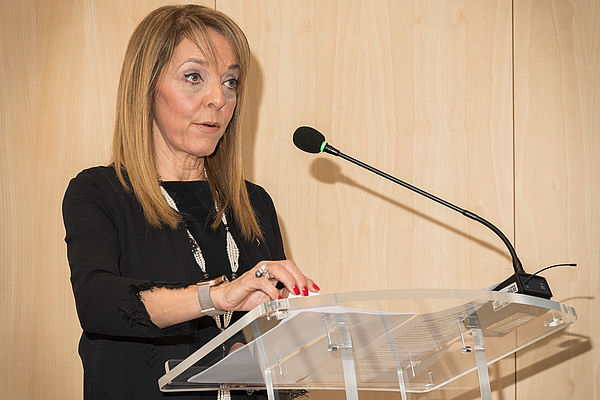 In her inaugural speech, she wanted to remember and thank those professors who “left a strong imprint on her”, such as Amable Liñán, Rodrigo Martínez-Val, Antonio Viedma, Juan de Burgos or Miguel Ángel Gómez Tierno and she also highlighted the passion for Aerospace engineering which is "moving us and unites us" in the ETSIAE.

Goals to achieve
The main objective for the next four years is "to continually improve the quality of teaching because we have problems such as massification in some degrees as well as the ageing of our infrastructures and staff”. In this regard, she requested the support and help of the Rector, "so that the staff and the means are appropriate both in quantity and quality”.

In her election manifesto she has already advanced the measures to be taken to achieve “a School of Excellence” and in this first speech as Director she has outlined them as follows: “to work on the improvement of our academic offer; to develop strategic lines of research as well as boost and make R&D&I visible; to strengthen relations with institutions, companies and organisations within the sector to achieve greater synergy of the training cycle + R&D&I + employability; to create a Director Advisory Board with people with professional proven track record, and promote the internationalisation of the activities of the School. In short, we will be the academic and research response to the demands of Industry 4.0”.

The Rector of the UPM has agreed that the new management "has the challenge to further increase the national and international positioning of ETSIAE, and it should continue to grow in order to be at the top of education and research within the aerospace field”.

To be a benchmark for future generations
In Cristina Cuerno's speech, there has not been a shortage of references to her being a woman within a predominantly male occupation in which “she has been able to find her own place”. Now she adds to her successful career this milestone as the first woman Director at ETSIAE and also the first woman to hold the position in the more than 90 years in the history of the training of aeronautical engineers in Spain. “There is nothing impossible if you indeed want it and work hard," she said. “Our responsibility is to be the benchmark for future generations of engineers so that facts like this are everyday events and not something unique”.

Working team
During this same event, the rest of the team members who are going to accompany Cristina Cuerno in this new journey have also taken office:

Cristina Cuerno wanted to thank all of them for their generosity in accepting their position and she described them as “talented people, with great working capacity and loyalty. The goals achieved will be to their credit and mistakes mine,” she added.

Termination of service of Javier Crespo
During the last four years, the responsibility for leading the ETSIAE has been in the hands of Javier Crespo, who has terminated as Director in this same ceremony. “We appreciate the work and dedication the outgoing director has performed, here is your mark in a not any easy task," said the Rector of the UPM.

In his stock of the mandate, Javier Crespo has defined his stage as "a period of consolidation, which has resulted in stability and growth”. Within his functions, he focused on the daily university management which should be governed by “diligence and the vocation for service.” 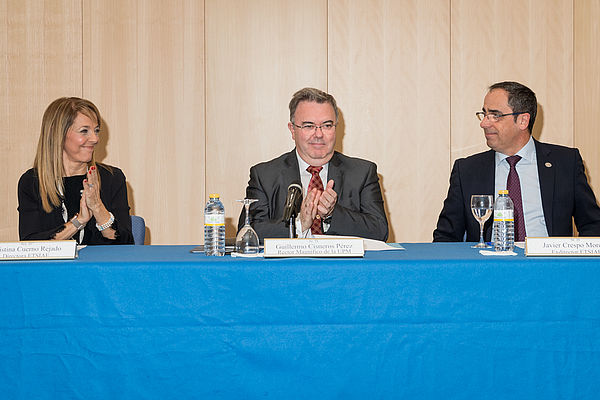 Some of the achievements made by the outgoing management team he listed, among others, are the following: “An academic planning that has worked correctly; the reduction of the number of enrolled students within the Undergraduate Degree in Aerospace Engineering, modernisation of the facilities and the reduction of energy consumption; international exposure and new international consortia; a daring practice management and growing activity of students affairs. A work done by all and which has been supported by the results, especially with regard to the creation of opportunities for our students”.

Attendance of Armed Forces, companies and other organisations
During this taking office ceremony, representatives of the main companies of the sector and the Armed Forces, such as the Chief of Staff of the Air Force, General Javier Salto, apart from School staff and students, have been present. This shows the good existing relationship among the industry and all the Armies, which will continue to be one of the ETSIAE features during this new stage.

Likewise, the association Women flying high (Ellas Vuelan Alto, EVA), an association of professional women from the aerospace sector, intending to promote gender equality within the sector, of which Cristina Cuerno is founding partner and member of the board of directors, has also attended the event.